Married At First Sight – what could possibly go wrong?

HomeCiceroMarried At First Sight – what could possibly go wrong? 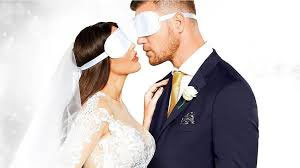 Whilst the current Chanel 9 television programme has been sweeping the nation and dominating talk at the water cooler at many firms across the country, I must admit to thinking about the premise of the show way too much in recent times. But first an admission – I am not a great fan of reality TV (Survivor being the obvious exception), but I do find myself on the couch, slowly being sucked into series as it is the favoured genre of the rest of my family!

The dating game is often used as an allergy for the recruitment process, with interviews compared to first, second and third dates, where both sides explore a bit about each other and decide at the end of each meeting what their feelings are for each other, and if they wish to continue the dating process, until it turns into a more serious proposition, or not. And so, whilst my mind wanders during the show, I find myself comparing it to the recruitment industry, and the fertile blogging thoughts that #mafs can produce. I could easily be sitting here writing comparing the processes that the “candidates” have gone through to find out more about each other, (and writing about how not to interview), but instead, as we enter the final week of the process I am struck time and again by the question – how on earth did the ‘experts’ get it so wrong?

With all the advances in AI and predictive technology, big data mining and algorithms to predict one’s perfect match – it is a blessed relief to me that less than 50% of the couples wish to remain together after less than 2 months. A relief because the rise of AI and talent scouring algorithms is the current and latest threat that will destroy the recruitment industry (according to the experts). I have been recruiting for long enough to have lived through a few of these “game changers” (on-line job boards, linkedIn, the rise of in-house recruitment etc) and after each one, the industry adapts, improves and moves on.

We, as recruiters, are held accountable for the results of the dating game to a far larger degree than the married at first sights experts seem to be. A recruitment firm that has a failure rate in its selection policy of more than a 50% drop out with the probation period would not be asked back to work with a client ever again I suspect (yet I have a sinking feeling that we will go back to the well for another series of this rating juggernaut), and would also soon be out of business due to the guarantee periods that we provide. If the candidate proves to be the wrong fit for the firm, then our fees are refunded. We are judged to have failed. Yet I can see no rush to condemn the algorithm that matched these couples as having ‘failed’.

Why is that? I suspect two reasons are at play here. One, the human guilty pleasure at being a spectator at an slow-moving train wreck that some of the non-relationships certainly were and the second is the general acceptance of the rise of the machines as being both a good thing and an inevitable outcome, which means in our minds it could not be the machines that have failed, but rather the humans who were selected as the test subjects, and to question otherwise is regarded as some form of heresy.

And yet, where is the accountability? Why are the fingers not being pointed at the failure rates of the expert algorithms? Why is the whole premise of the show and dating platforms not being questioned in light of its terrible strike rate?

It is obvious to me that falling in love is not an exact science no matter how hard we try to make it so. Likewise, I have long proposed that recruitment is not a science but an art, and no the joke is not lost on me that there is more than one type of ‘artist’ to be found in my industry.

So where does that leave us at the end of this pondering?

Firstly the inevitable conclusion that this show and I suspect others like it could be fertile blogging grounds in the future – you have all been warned.

Secondly, that if recruitment is still an industry where the best results are to be found by engaging with a human recruiter, then it matters which human you choose to represent you as an individual or as a hiring manager. Cicero has been in existence for more than 15 years, and it is our proud boast that during that time, we have never had to refund a fee under our guarantee terms, which are some of the most generous in the industry. We take the time not only to ensure that the candidates put forward are exactly what our clients are looking for, but also that the

move makes perfect sense when matched against the candidates’ career goals and aspirations.